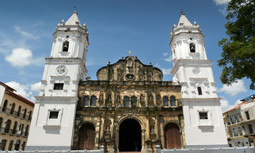 Certainly one of Central America’s most striking capitals, Panama is cosmopolitan and full of contradictions. Head to Casco Viejo – the city’s quaint and old colonial quarter to get a glimpse of old Panama, and then the glittering skyscrapers of its banking district to see the city’s more chaotic, modern side. Afterwards take a stroll down to the ruins of Panama Viejo, which was the original city of Panama – much of which now lays in ruin, slowly being taken over by modern development.