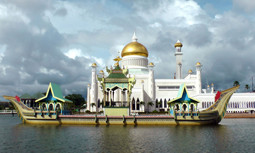 Brunei is generally hot and humid with temperatures hovering between 22°C and 32°C with the seasons best split between the rainy season from September to January and the dry season between February and April. This can be a little deceiving though as Brunei one of the wettest countries in this part of the world, and is rainy throughout the year, though it mostly falls characteristically – with peak heavy rainfall at the end of the year.

The best season to visit Brunei is generally the dry season though it really depends on what you intend to do once there. For example – if you feel like experiencing a festival whilst there then you could time your visit to coincide with the end of Ramadan – as aside from the various celebrations, the Sultan opens his Palace to visitors.